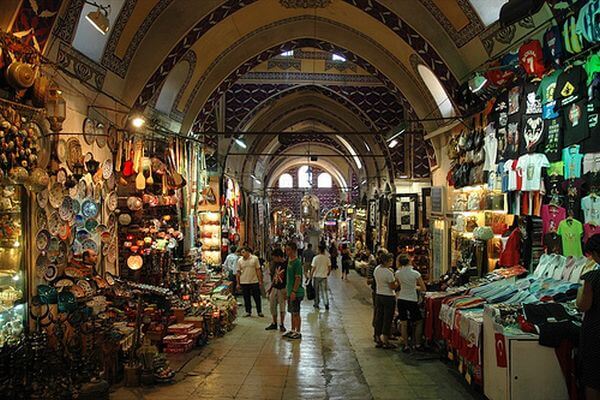 In Turkish system on the other hand, bedesten, the covered and enclosed core building, where the most expensive and valuable goods are exchanged, determines the formation of the whole bazaar, as can be seen in Bursa, Edirne or Istanbul covered bazaars . Contrary to usually timber‐framed shops, bedesten and arastas of the Turkish bazaars are predesigned and built in single sessions without any expansion. Since, the ownership status as mentioned before, belonged to the vakıfs, as long as there is demand, and as long as the vakıfs had the capital, shop strips were built within time and the bazaar continued to expand horizontally.

The Grand Bazaar was founded in 1461 by Fatih Sultan Mehmet after he had conquered Constantinople in 1453, forming a significant conclusion for the Silk Road, on a site where a Byzantine market was supposedlybeing held earlier probably around Old (inner) Bedesten .First, there were two Bedestens forming the nucleus of the Bazaar; (inner) Bedesten and Sandal Bedesteni. The four adjacent sides and the immediate surroundings of the Bazaar were encircled by hans each of which was a separate unit in themselves. The Bazaar, founded by Fatih, has been improved and enlarged by his successor Suleyman The Magnificent . The complex structure of the Grand Bazaar has evolved over the centuries, in 1631, 1701 and 1954 fire made serious damages at the bazaar and 1894 earthquake also destroyed parts of it. The bazaar was reconstructed again and reached its contemporary plan in 1701 ith 64 covered streets, eleven gates and 200000 m² area . The space allocation of Istanbul Bazaar can be defined as a grid based system, where streets are intersecting each other. Grand Bazaar has streets of various length and width.

The Grand Bazaar (Kapalıçarsi) is one of the largest covered markets in the world with 60 streets and 5,000 shops, and attracts between 250,000 and 400,000 visitors daily. It is known for jewelery, hand-painted ceramics, carpets, embroideries, spices and antique shops. Many stalls are grouped by type of goods. The bazaar has been an important trading center since 1461 and its labyrinthine vaults feature two bedestens (domed buildings), the first of which was constructed between 1455 and 1461 by Sultan Mehmed.

The complex houses two mosques, four fountains, two hamams, and several cafés and restaurants. In the center is the high domed hall of the Cevahir Bedesten, where the most valuable items and antiques were to be found in the past, and still are today, including furniture, copperware, amber prayer beads, inlaid weapons, icons, moth er-of-pearl mirrors, water pipes, watches and clocks, candlesticks, old coins, and silver and gold jewelery set with coral and turquoise.

Gates:
The Grand Bazaar has four main gates situated at the ends of its two major streets which intersect near the southwestern corner of the bazaar