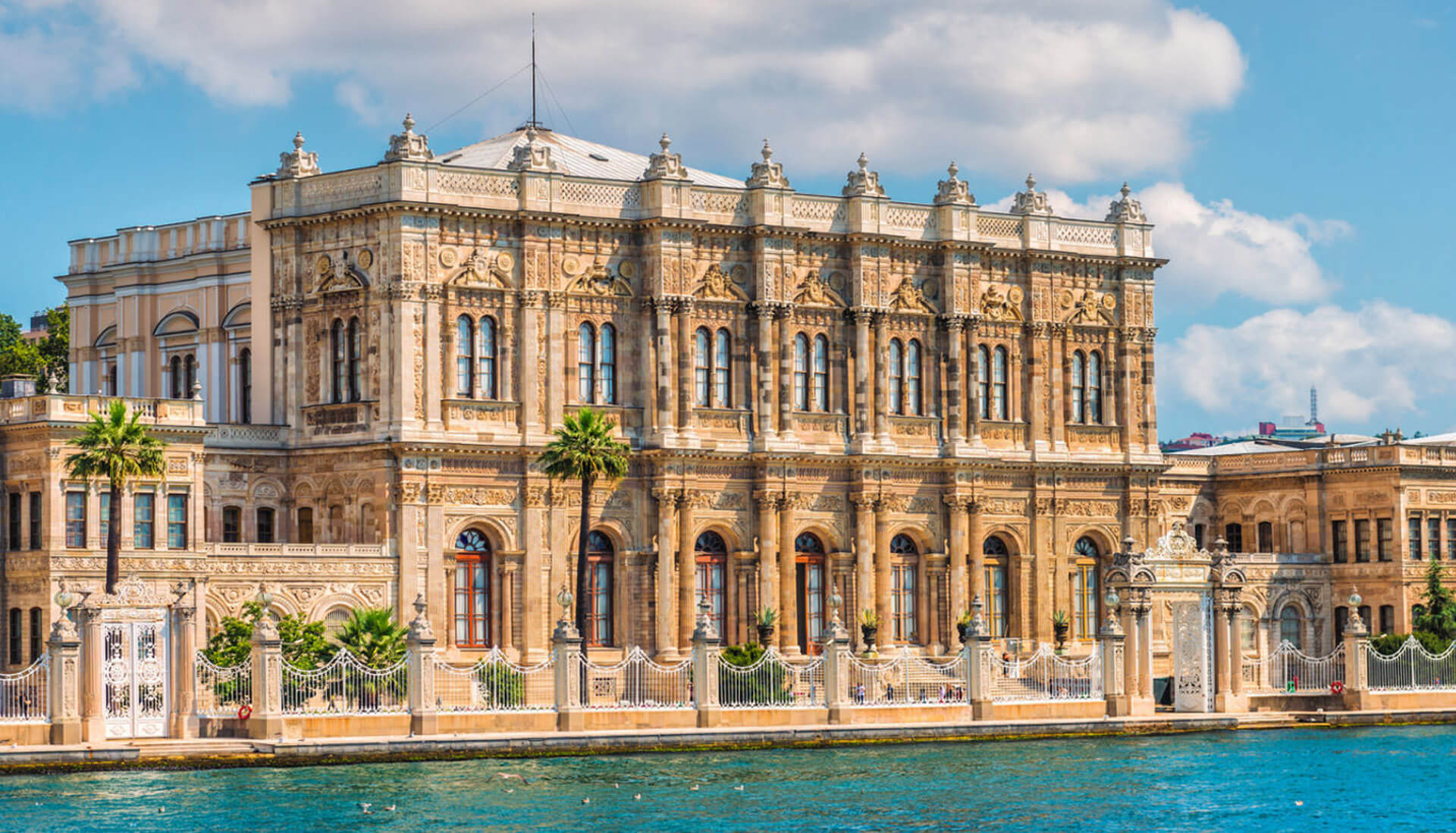 The Beylerbeyi Palace was considered as a state guesthouse to be hosted by the Ottoman sultans’ summer resort and foreign state president or rulers and built upon the request of Sultan Suleyman Abdulaziz (1861-1876). The construction of the palace began on August 6, 1863 and was officially opened on Friday, April 21, 1865, at a ceremony. The organization of the palace construction was carried out by Serkiz Bey (Balyan), the Ebniye-i Şahâne Selkalfası (Palace chief). Mehmed Efendi, Mahmud Efendi and Rifat Efendi conducted the confidentiality duty of Beylerbeyi Palace, which could be called as financial and administrative affairs responsibility. It is determined that the palace is worth about 500 thousand Ottoman liras. Beylerbeyi Palace, which is the main structure of the communities of constructors, is a two storey building with a high basement. Built on an area of approximately 2,500 square meters, the building sits on a rectangular floor area. The southern part of the palace was organized as Mabeyn-i Hümâyûn, and the northern part was arranged as Valide Sultan Circular. There are 6 rooms, 24 rooms, 1 bath and 1 bathroom on both floors. Beylerbeyi Palace, Harem and Mabeyn sections built with the mixing of Western and Eastern styles, has a Turkish house plan feature. The roof of the building is concealed by a guardrail that hides all the sides of the facade from above. The palace plan has a plan composition based on the motif of the central sofa (hol). The diagram in Beylerbeyi Palace consists of three parts. These sections are; Mabeyn-i Hümâyûn, Bed Room (Office of Honor) and Valide Sultan Office. The main Harem section belonging to the ladies and ikballs, which was constructed immediately after the Valide Sultanate and built parallel to the sea, was constructed separately from the main structure; This structure has not reached the end of the day. The entry front of Mabeyn-i Hümayun shows an arrangement in which the neo-baroque emphasis is more pronounced. The interior arrangements of the palace, such as the masses and the fronts of the palace, are also shaped by an eclectic understanding. The reason for Sultan Abdulaziz’s enthusiasm for the sea, which built the Beylerbeyi Palace, and some frames and cartridges on the ceilings of the palace, Even Sultan Abdulaziz, has drawn designs that include the themes of the sea and the ship to give the painters an idea.

Beylerbeyi Palace was used as a summer palace by Sultan Abdülaziz (1861-1876). Saray, Sultan Abdulaziz and II. In the reign of Sultan Abdulhamid, the state became a guest house with the start of being allocated to them during the official visits of rulers or presidents. The first important guest to be hosted at Beylerbeyi Palace was Eugénie, the Empress of France. This tour of the Empress took place at the office of Sultan Abdulaziz’s return to France in 1867. Other foreign guests hosted at the Beylerbeyi Palace during the reign of Sultan Abdülaziz were the Austrian-Hungarian Emperor Joseph (1869), the Prince Frédéric Guillaume Nicola Charles (1869), the Italian Crown (1869), the Shah of Iran (18 August 1873) During the reign of Abdulhamid (1876-1909) for 33 years, the Beylerbeyi Palace also served as a museum, especially visited by the foreign state protocol. In this period, Dolmabahçe Palace and Topkapi Palace Treasure-i Humayun with Beylerbeyi Palace were used as the reigns of the sultanate that could be visited with the permission of the Sultan. Sultan II. Immediately after Abdulhamid’s assassination, he was subjected to compulsory residence at the Thessaloniki Alatini Lodge, but after about three years he was transferred to Istanbul for the outbreak of the Balkan War. II. The new compulsory residence chosen for Abdülhamid was Beylerbeyi Palace. Hakık Hakan has spent the last 6 years of his life in this palace and on February 10, 1918, he still eyes his eyes in this palace.
Palace in the Republican Period
At the Beylerbeyi Palace, foreign state guests were also welcomed during the Republican era. The Iranian Shah Pahlavi who came to Turkey in 1934 was welcomed by President Gazi Mustafa Kemal Atatürk in this palace. The Balkan Games Festival was organized in Beylerbeyi Palace in 1936. Mustafa Kemal Atatürk spent that night in the historical bedroom of Beylerbeyi Palace.